Every county and city in California must have a general plan, which is the local government’s long-term framework or “constitution” for future growth and development. The general plan represents the community’s view of its future and contains the goals and polices upon which the Board of Supervisors and Planning Commission will base their land use and resource decisions in the future. Typically, a general plan is designed to address the issues facing the County through at least the next 20 years.

The general plan is made up of a collection of “elements,” or topic categories. The State currently lists nine elements as mandatory: land use, circulation, housing, conservation, open space, noise, safety, environmental justice, and air quality. Communities may include other elements that address issues of local concern, such as economic development, healthy communities, alternative energy, or military compatibility. Jurisdictions can organize their general plan anyway they choose, as long as the required topic categories are addressed. For instance, Kern County is looking to incorporate environmental justice policies throughout the General Plan and not as a stand alone element.

For more information on the structure and legal requirements of a general plan, or to see a list of planning-related terms and acronyms, the following publications are recommended: 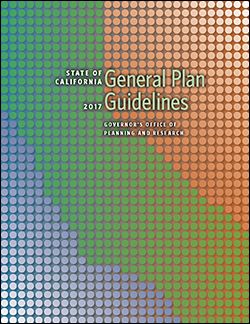 Published by the Governor’s Office of Planning and Research (2017) 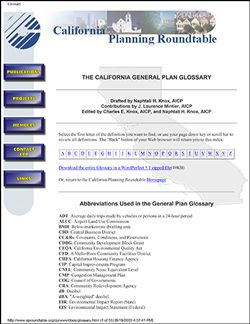 Published by The California Planning Roundtable (2001)